LEGOLAND Discovery Center at Assembly Row  in Somerville has arrived! Who wouldn't love to jump into the LEGO® Fire Academy and LEGO® Construction Site, or explore a miniaturized city of Boston built with 1.5 million LEGO® bricks with sounds, interactions, and touch screens, or save a princess from trolls and skeletons on the Kingdom Quest Laser Ride or see how fast you can pedal on the Merlin's Apprentice Ride!

The Discovery Center is a great place for families to explore, learn, and enjoy! This is the ideal family attraction for children 3-10 years old. A requirement for admission is that you do attend with a child, however, adult nights are offered for adult fans of LEGO®. Being an adult who attended I can highly recommend this is a must for any adult out there with or without little ones!

The LEGO® rides and play areas are great to explore with children. They allow children to be 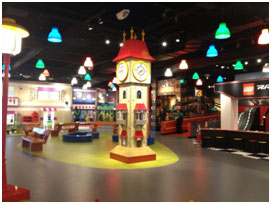 themselves, play and explore all while learning! There is a life-size doll house that little ones can wander through, sing karaoke in, and cook up an imaginary storm in! You can learn more about Olivia's House here.

Directly across from Olivia's is the Play Zone. Here you can run, climb, and power your way through the Fire Academy! This area includes climbing walls, slides and a jungle gym for maximum fun.

Adult exploration and fun can be had in MINILAND as you explore and enjoy the iconic images of Boston. MINILAND was great for children and adults alike since you could interact with the exhibit based on your age. At first glance it is a replica of the city made out of  Lego's, but when you stopped at each attraction or building you saw there was another level of interaction. My favorite was the Hampshire House! Below the Hampshire House was "CHEERS", the famous bar where everybody knows your name! When you stopped here and pressed the button the theme song played, and the bar underneath the main building lit up showing an entire bar scene of Lego's including beer mugs, pretzels, and patrons! Similar underground interactive scenes took place through MINILAND including the underground subway workings of the MBTA, a sunken ship in the Charles River, LEGO® figurines enjoying tea under the Tea Party Ships, a battle taking place at the USS Constitution, and an interactive ball game at Fenway Park. MINILAND would also change from night to day and portray the city at night for visitors as well as in daylight. I could have stayed for hours to explore with or without a little one by my side.

If you are debating checking out this new discovery center, don't hesitate tickets are already being sold out months in advance! You can reserve your spot here and thank me later.