My first Pride was probably somewhere in 1982-1983. It was about a decade after the 1st Boston Gay Pride March in 1971, which commemorated The Stonewall Riots in NYC a few years before. It was called a "March" back then and did indeed have a more in-your-face, political feel to it. I remember feeling emboldened by the simple fact of being in a crowd of gay people that large marching down the streets of Boston. I also remember people covering their face because they feared reprisals at home or in the workplace. I was there when the March (now a Parade) got too big and city officials tried to end it early but we walked right through and past the police cars blocking Arlington Street. I was there when a well-meaning group from ACTUP the AIDS Awareness group started by Larry Kramer yelled at us "Thousands dead what are you 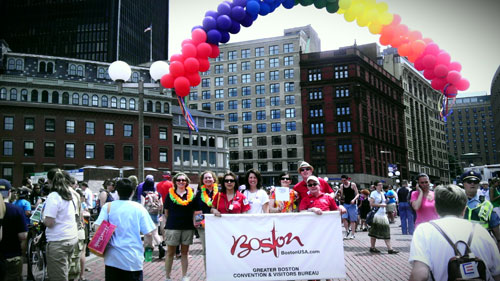 All I could think of was "That we are still here. We have survived and we are still here." I was there when the guy on stilts wearing nothing but a kilt flashed the crowd and caused a scandal. We were used to the press picking up on the more provocative sights of the Parade, but there were kids watching now and since public nudity is, well, you know, frowned upon, we began to debate what was appropriate behavior; the one thing that struck me was that there WERE kids and families watching. Not protesting. Not carrying hateful signs. Just WATCHING. I did not think it then but looking back now that was a huge shift.

I was there when all the banks and churches and companies started marching in the Parade causing an older gentleman standing next to me state somewhat tongue in cheek "Don't you miss the days when we were mostly shunned?" This, of course, was said in that self-deprecating way so embraced by the gay community. We can laugh at ourselves first so take that! But I remember the twinkle in his eye that said we can celebrate where we came from but where we are going may be better. That being said, may the chance to throw off a catty one-liner never fade!

I remember mostly sunny Pride Days and I always took that as a sign of goodwill from Mother Nature. But there was that one year in just poured, POURED with thunder and lightning. There was this float with a bunch of young kids, like me years before, determined not to give in and stop the parade. "That is what they want" they screamed into their megaphone just as a huge 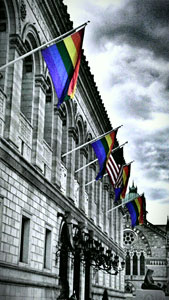 clap of thunder followed by a streak of lightning flashed from the sky and struck the street right next to the float. I remember we ended up going to Newbury Street where my friend Robert bought a Stone Ware dinner set for 8 that we then had to carry to my car. So right then and there we bought into the stereotype of when in doubt gay men shop. Bought into...see what I did there? Robert never did have that dinner party as I now recall.

Over the past 31 years, there has been more sun than rain, in my memory anyway. There are families now IN the Parade. There are more strollers with toddlers being pushed by their either married or not married 2 moms and 2 dads. So I look forward to the Parade this Saturday and I hope it is sunny. I hope that the current sentiment that young people in the LGBTQ Community do not feel the need to participate in Pride is overstated. I will probably dress to look younger than I am and will hold the hand of my husband of many many years (but legal for seven) as I walk through the streets of Boston. Sure there will be some politicians and corporate sponsors, and maybe a little controversy, but above all else, there is still a NEED to MARCH. March to show solidarity in numbers; March to celebrate all that has been and will be accomplished; March to celebrate the huge diversity of a single group of people; March just like anyone else who ever walked in a Parade for any reason, because you are proud to be there!