After serving nearly two decades as Boston's mayor, Thomas M. Menino chose not to run for another term and will be leaving office this year. As part of his curtain call, he is again presenting the "Mayor's Holiday Spectacular" discount ticket program that his office began ten years ago. 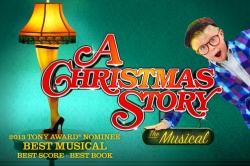 The holidays may make spirits bright, but they can also make wallets light. The Holiday Spectacular helps soften the blow by offering tickets to dozens of shows, activities, and events during the holiday season for half price. Holiday-themed presentations abound, such as A Christmas Story, The Musical at the Citi Wang Theatre. Santa Menino can get you tickets that regularly go for $45 to $55 for only $23 to $28. There are similar savings available for Holiday Pops at Symphony Hall, The Nutcracker at the Boston Opera House, and The Christmas Revels at Harvard University's Sanders Theatre.

There are plenty of non-holiday-related performances participating in the program as well such as Blue Man Group, Sleeping Beauty, and Camelot. Or you could catch shows by Ronnie Earl and the Broadcasters, Jonathan Edwards, or comedian Chris Kattan.

How about dinner and a show? The mayor has you covered there as well. By printing out a coupon on the site, you could get $10 off your tab at about two dozen of Boston's finest eateries, including 29 Newbury, Nico Ristorante, and Skipjack's Seafood Restaurant.